Excerpts from The Fields of Ukraine:

..On the march to the train, I saw people collecting stones. These were to be used to cut the wire that was drawn across the air vents in the train wagons. We were again packed in tightly. The conditions in the wagons were probably more cramped than they had been in the synagogue. The small windows were sealed with boards and barbed wire in order to prevent escape or any attempt to see what was going on outside. Inside the wagon, all three of us were still together. We met many people whom we knew; Yisrael Buchwalter and Max Prinz among others. In later years I was to learn that Max Prinz had survived—perhaps the only other person in that carriage to do so. He had stayed alive through all the trials of the war; we met at the end of the war in Poland and afterwards in Israel.

As soon as the train began to move, we started looking 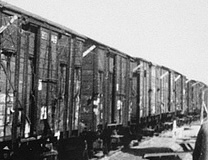 for ways to escape. We began to cut the barbed wire that covered the small window. Nobody told us where the train was going but we felt that the sooner we could escape the better it would be. I believe that the train was bound for Belzec.

The day was one close to the end of October 1942. It became dark in the early afternoon. I now found myself pushing my way out of the small window that we had managed to open. At that instant before I jumped, I turned toward my mother and father and shouted, “Mum and Dad, take care! Good­bye!”

As I jumped out, I threw myself in the direction of the train. I had been told that to jump in the other direction was very dangerous. When I fell, I injured both my hands but the cuts were not deep. I heard shots ringing out after me but the only blood I found was from the cuts that were the result of my fall from the train… 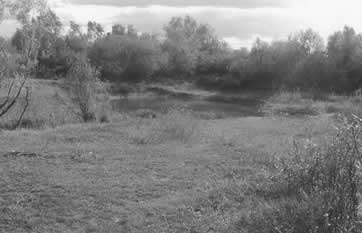 …During those first weeks of wandering in the fields, when we still hoped that the war would end before the close of 1943, we believed that we might come across many other Jews who had suffered like ourselves and had saved themselves just as we had done. As the period of our hiding out in the fields grew longer and the winter season passed by, there seemed no end to our plight. My father became less hopeful and determined, and more and more fearful that the bitter realities of things would overcome us. I, too, who drew my strength of spirit essentially from my father’s innate certainty and optimism, began to understand that the chances of our meeting other Jews who had survived—among them members of our own family—were growing smaller and smaller. The fact is that we never met even one single Jew during the course of our wandering. When we first dug our hideout, we spoke to each other of the certainty that other Jews were doing exactly the same thing and that they too would succeed in remaining alive. As the days wore on, I accepted the idea that we would continue to remain isolated and alone. After the Liberation, when we returned to living a civilized life once again, we were to learn that no one, either acquaintance or relation, had survived in the way my father and I had.

Even though we lived beyond the pale of humanity for a long period, we never lost account of days and months. My father knew how to calculate the dates and memorize them. We never stopped counting the days—perhaps because this was the only thing that we shared with the world at large, the only witness to the fact that we too still walked the planet Earth. We were very careful about the counting of days, and although we had no means of writing things down, we made no mistakes about the calendar. We always knew when the Sabbath and Jewish festivals fell. Of course, we had no means of celebrating them beyond the exchange of happy memories of those times. We would sing a whispered song that spoke of the division between Sabbath and weekday. Our Sabbaths were no different from the weekdays. All I had was the memory of the way that the Sabbath was once celebrated in our home…

Born Harry Taub on 2/1/1940 in Bucharest, Romania, Haim Tal survived WWII and the Holocaust when he and his family were hidden in a local farmer’s house. He arrived in Israel in 1950, serving in the Israeli Defense Forces in both the Six Day and Yom Kippur Wars. Read more about the author...